2018 TEACHINGS OF THE SACRED

These TEACHINGS OF THE SACRED are a comprehensive study and integration of esoteric disciplines, ancient wisdom teachings, ceremonies and earth-honoring ways of living which offer a reconnection to all that we are with all that is.  It is part of the Great Awakening,  a rekindling of knowledge so crucial for humanity in this time now.  This wisdom cannot  be energetically transferred through words alone, but through direct experience with the sacred. This knowledge cannot be found in books, it has always been passed down orally from Teacher to Student and integrated through instruction and guidance. That is why this year’s Sacred Studies  will be taught at the sacred sites themselves, with Cynthia and wisdom keepers of their traditions sharing the wisdom of the Mystery School teachings of the Ancient Americas!

INITIATION INTO THE MYSTERIES – PYRAMIDS OF TEOTIHUACAN 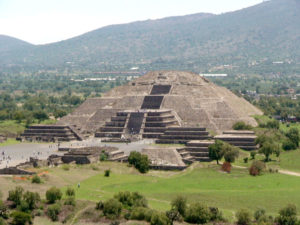 Back to our Origins: There are common threads found in all creation stories of an epoch of time before the great deluge, when gods and giants walked the earth.  There are ancient texts and sacred oral histories that speak of lost epochs of time when other root races and great civilizations and lost Motherland continents existed on this planet.  Every ancient civilization and indigenous culture have their own stories of a past golden age when just the “gods” reigned, followed by the semi-divine gods and finally humans.  What is the truth of our origins?  Why were pyramids and temples built on every land mass on earth, and who built them?  What messages did the original builders leave in stone for humanity?

In our Western Hemisphere,  the pyramid complex of Teotihuacan, Mexico holds the energy and the legends of this lost epoch of time in so distant a past that only the gods reigned.  No one knows the original name of this Holy City or the race that built it, but it remains a Spiritual University, a City of Light, which is known as the place “where humans become as gods” … TEOTIHUACAN.

For initiates, Teotihuacan remains energetically active as a Mystery School and a place of learning systems and practices for accelerating self-awareness and soul evolution. Here, at Teotihuacan this body of knowledge is held in the Toltec Teachings, and originate from the same source as all universal teachings and cosmic principles deposited by the ancient ones at specific sites throughout the planet. These esoteric teachings went underground and became the mystery schools of the Eastern, Western, Oriental and Tibetan philosophies.

My primary Native American teacher always said that we must first harmonize with the teachings from the land  in which we were born.  This year our Teachings of

the Sacred will take us on a spiritual quest throughout the Ancient Americas, beginning with the pyramids of  Teotihuacan, the crown chakra of the earth’s energy system in our Western Hemisphere!  In this transformational spiritual warriorship training intensive, we will go back to the beginning through sacred texts, oral histories and legends, in search of the original truth. We will delve into  the universal laws of energy and practices for deepening into the authentic self. We will draw upon the ancient mystery school teachings of the Ancient Americas … disciplines to rid ourselves of the emotional scars of past woundings and negative patterns. We will deepen into the importance of owning what we have been given in this life to shatter the masks that disguise our fears and insecurities. We will learn to move past victimstance and disempowerment toward self-love and authenticity. These Toltec practices were refined as a spiritual art and practiced as a way of living life by the ancient ones of Teotihuacan!  They are specific teachings and disciplines for reclaiming energy, for healing, and for developing our own truth and personal freedom to live heaven on earth!  I look forward to your joining me in the City of Light !  In love, Cynthia 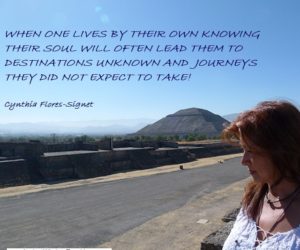 CYNTHIA FLORES-SIGNET is a teacher of esoteric wisdom found in indigenous cosmologies, ancient mystery schools and sacred histories. She believes that  sharing these ancient wisdom teachings of universal truth and disciplines for living in harmony with nature are crucial for humanity in this time now, to reconnect to all that we are…body, mind, soul and spirit.

Cynthia has devoted most of her life to extensive apprenticeship with indigenous medicine teachers and wisdomkeepers of the Ancient Americas, weaving and integrating the ceremonies and teachings that they have lovingly shared with her into an everyday practiced spirituality.  She has been teaching Toltec wisdom to her groups in her “ancestral home” of Teotihuacan for the past 15 years.

DETAILS AND REGISTRATION FOR SPIRITUAL WARRIORSHIP TRAINING INTENSIVE IN TEOTIHUACAN